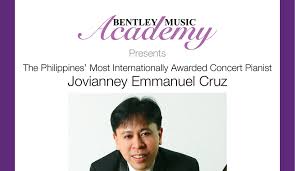 Jovianney Cruz was the first Filipino to be invited as Juror in the First ASEAN International Chopin Piano Competition held in Kuala Lumpur and twice the adjudicator in the Hong Kong School of Music Festival’s several years of existence. In 1996, President Fidel V. Ramos conferred on Mr. Cruz The Outstanding Young Men (TOYM) Award for Music, for his contribution to the Arts. The Philippine Daily Inquirer has dubbed Mr. Cruz as “…one of the greatest pianists the country has ever produced!”[2]